Robot Mimicry or Mastery? The End of Bench Manufacturing Is Near

At the recent IndustryWeek Manufacturing & Technology conference, I had a chance to go on one of the plant tours. The factory was making a device that had maybe 10 parts in it. Robots dutifully prepared trays of the key components so that human employees at seven different stations with a tact time of 30 seconds or less per station could assemble the device. They had a very nice looking and cleanly organized work station with a thick squishy foot pad to avoid the fatigue of working on your feet all day.

When we asked the plant manager why humans do the bench work versus other jobs in the factory like pick and pack, he said that the pick and pack of the trays of components was done by robots because it was a source of tedium and potentially repetitive stress injury. 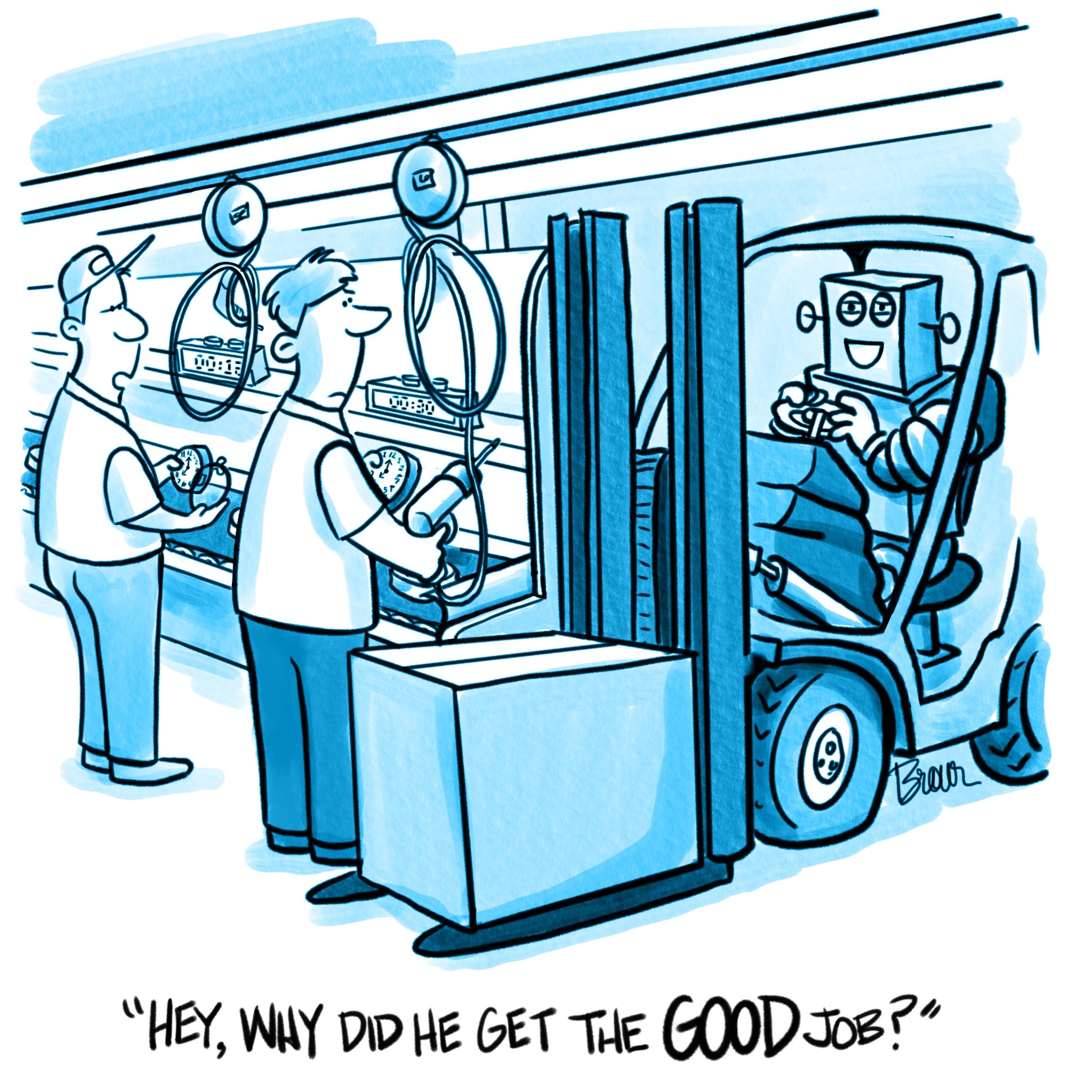 What kept running through my head was, “What about the bench itself?” While the humans could rotate between the seven stations, the jobs included screwing a pump into a plastic case, inserting an LCD display, or screwing the case shut. To me, these seemed repetitive and leveraged little of what makes humans the apex of the food chain; namely, our brains.

Don’t get me wrong. This was an incredibly well-run factory, but if humanity’s future in manufacturing is inserting a few screws because our hands are still more dexterous than most affordable robots, then we are doomed.

I would characterize most bench assembly operations as “robot mimicry,” where we are being asked to mimic a task that a robot would ideally do – if an affordable one existed that could do that task. What brain power needed to be applied was mostly devoted to visual inspection of whether the parts appeared to be defect free and calculating just where your hand should be to do the task very quickly.

I could tell as I watched the people doing the work, they were good at their jobs, fluidly grabbing parts and punching in screws in motions so smooth it was almost ballet-like. On the other hand, I imagined them getting up at 6:30 a.m., making breakfast for the kids, driving to work, clocking into the job, and getting to their bench only to then be prized for essentially how well they moved their hands. I know that the factory I toured offers reasonable wages, a nice work environment, and is generally a very good employer. But if I could wave a robot magic wand and apply these folks to higher-order tasks, I would.

What was clear is that their company probably feels the same way, but the reality is that affordable industrial robots don’t have the dexterity of humans – and won’t – for some time.

The operative word here is affordable.

Advanced automation is already showing that incredible dexterity is already possible at scale, as evidenced in this video from a manufacturing facility in China. That, however, doesn’t mean that every design of every product could even utilize this equipment today. Some designs were created with the human hand in mind. When we think about designing for manufacturability in the future, we’ll be designing for the robot “hand.”

Every manufacturer is wrestling with the enduring role of humans in the factory. Most manufacturing leaders have a clear view that they’ll be adding significantly more automation, but have yet to clearly plot out the enduring roles for humans.

There are jobs that are clearly ready to go away, like pick and pack (Amazon and others have already replaced this function with robots), packaging and palleting (which was already automated at the factory I toured).

I would contend that bench is the next to go.

Now, bench zealots will argue that some bench jobs are super complex and require lots of judgement and critical thinking. And they would be right. The reality, though, is that those are the minority of what is out there. Manufacturers need to look no further than the bench to demand solutions from advanced manufacturing and robotics companies.

At the same time, manufacturing should literally be engineering into their future the lasting role for humans. With millions of jobs destined to come back to the United States alone because of reshoring, these jobs will be far more sophisticated and will be a good source of both great wages and the full use of human potential.

What manufacturers need to think about is how humans can move from robot mimicry to “robot mastery.” By this, I mean what tasks in advanced manufacturing best leverage human skills to be the master of the technology that, if harnessed correctly, can help us maximize output? “Harness correctly” is the key phrase here, and that is where human judgement comes in. According to research by Salesforce on how the Fourth Industrial Revolution is changing the future of work, 73% of hiring managers believe creative-thinking skills will be increasingly important in increasingly automated industries.

Some things we humans are uniquely good at in these settings include:

Moving forward, one of the critical decisions that manufacturing leaders must make is how they will organize their own teams to design their futures. Every company should be gathering complete data on their work processes to determine when and where automation will make sense. Some obvious findings will emerge – like my belief that most bench assembly work is ripe for robots.

As part of this, manufacturers need to design the jobs of the future. They must carefully consider where they can leverage the full potential of humans and turn them into robot masters, and design the support systems that will help them best work with each other and with the increasingly sophisticated machines around them.