A version of this article was originally published in the World Economic Forum’s Agenda.

We are in an increasingly volatile global climate, from trade wars on multiple fronts to political unease to economic crises, to name just a few. During periods like these, it makes sense that corporations generally shift toward a more conservative stance, taking a “wait-and-see” approach to business decisions.

However, instability can provide exceptional opportunities for companies to innovate and accelerate ahead of more conservative competitors.

One of the biggest, and often hidden, issues for the global economy is the massive number of industrial workers who are at or close to retirement age. In the U.S. alone, there are an estimated 53 million baby boomers still working, with the oldest 73 years of age. This is a timebomb of knowledge leaving the workforce.

In manufacturing, the Fourth Industrial Revolution is fully upon us. Yet, according to a poll by the Manufacturing Institute and PwC, only about half of manufacturing companies are in the early stages of smart factory transformation, and 20% “have a desire to adopt” digital, but are experiencing blockers.

The number of companies just watching rather than acting needs to decrease, and those that are already in the midst of digital transformation should consider leveraging this moment to accelerate their journeys.

Here are five reasons why manufacturing leaders must get started on implementing their digital strategies now:

When factories first moved overseas from first-world countries, the idea was to reduce the largest input in product development: the cost of labor. But those cost savings are shrinking. As Boston Consulting Group’s Justin Rose and Martin Reeves argue in the Harvard Business Review: “In 2004, the cost of manufacturing on the east coast of China was approximately 15 percentage points cheaper, on average, than in the United States. In 2016, that gap was down to about 1 percentage point.”

Another reason factories have remained overseas is that as products became more complex, equally complex supply chains developed around those factories to make producing these complex goods possible. But with technologies like 3D printing, there are already documented examples of 20x reductions in parts in a given product. This means factories are free to come home, since they are no longer beholden to their supply chains.

With atoms becoming as easy to manipulate as bytes, and as supply chains become regional and are cut to a fraction of their current size, smaller footprint factories – or localized microfactories – will be able to produce more products to meet demand in a fraction of the space. This means factories can now be near the urban centers they serve, following the trend that Amazon has already established in fulfillment. And as retail continues to vanish from main streets and malls, the cost of land in the middle of or at the edge of cities will drop.

3. The Number of Product Variations – “SKU Explosion” – Will be the New Norm

It’s no surprise that consumers are demanding more customized choices; take, for example, the trend of manufacturing smaller or single-serving products targeted at solo households. The proliferation of more variations of products – known as SKU explosion – will only accelerate, and technologies like 3D printing will enable manufacturers to meet the demand. To control operating costs, though, factories will not only have to be infinitely flexible, they will need to be very efficient. Changeovers, for example, will move from something performed a few times a day to a continuous exercise.

4. The Experienced Labor Shortage Will Get Worse

An infinitely flexible, smaller factory will be significantly more automated and require workers with a vastly different skill set than what most factories have now. Advanced manufacturing jobs are increasingly becoming sophisticated jobs that contribute to the widening skills gap; in a 2018 study, Deloitte and the Manufacturing Institute predicted that an estimated 2.4 million positions will remain unfilled between 2018 and 2028, with a potential economic impact of $2.5 trillion. 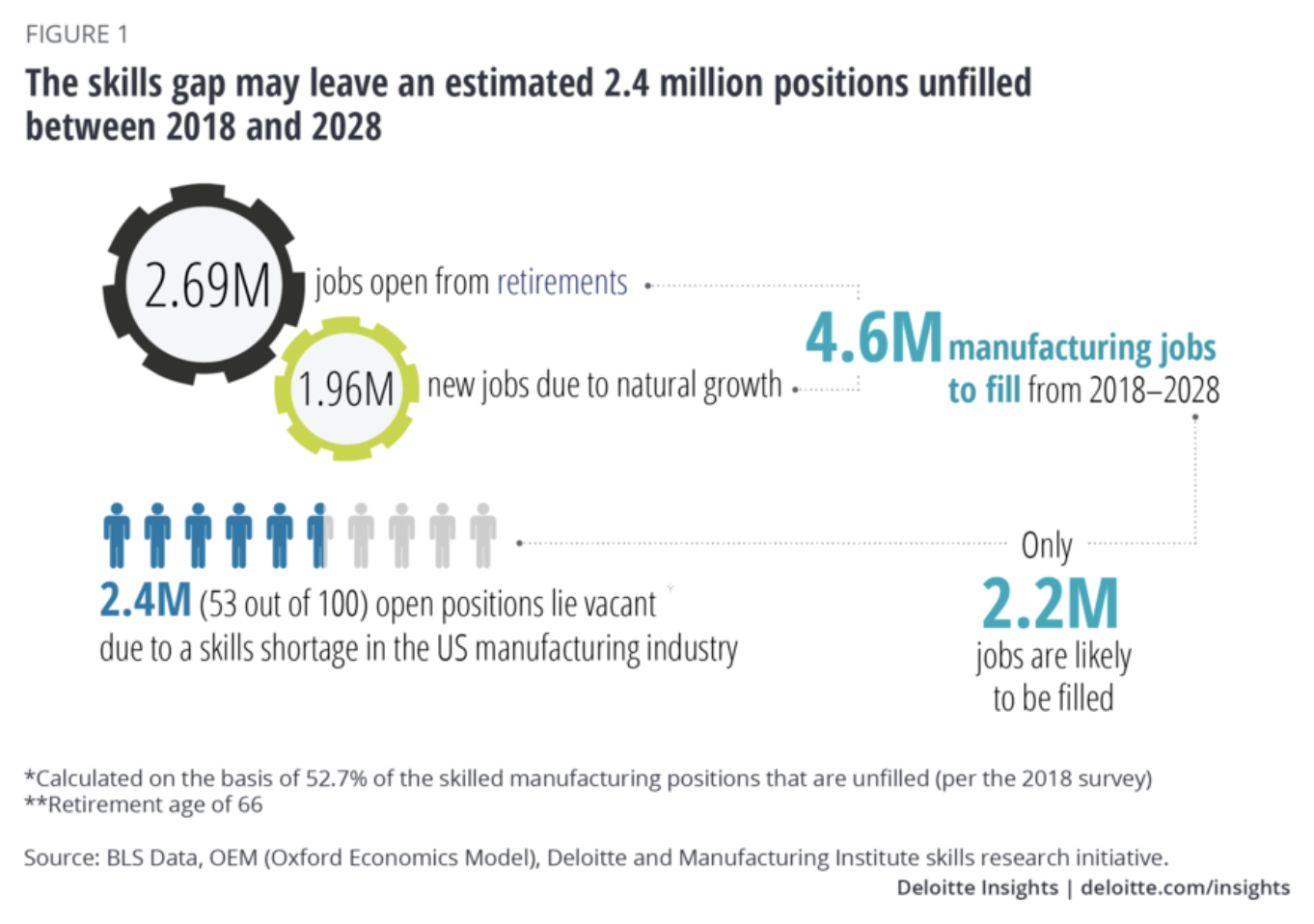 5. Workers Will Need to be More Connected

In the factory of the future, each worker will command a small army of machines. They will need to communicate with those machines and each other in real time. And with millions of dollars in complex equipment and output on the line, work needs to happen with even more surgical precision that ever before.

As with most sea changes, the spoils generally go to the bold first movers. Manufacturers who leverage these trends as catalysts for their digital innovation efforts will take the lead.